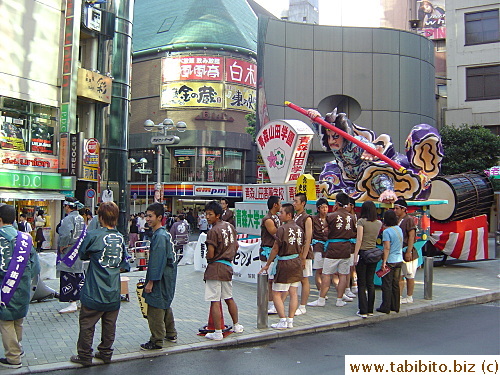 Although we missed the Matsuri in Omotesando, we didn't miss a Matsuri that Saturday.  Fate wanted us to see one, and we got one.


When we walked to Shibuya (

) from Omotesando, we stumbled across a group of Aomori University students and staff in costumes idling beside a float near Shibuya Center Street.  They were chatting and just hanging around waiting for their parade to start.

I took a few pictures of them and KL and I continued on with our window shopping.  We didn't know when the parade was to start and there was no point waiting around for it.  Just after 5 o'clock in the evening, we decided to leave the department store we were in and have an early dinner.  While we were walking on Shibuya Center Street heading toward our favorite restaurant, we heard this thunderous drumming noise, Japanese flute playing and chanting.  The Matsuri by the university students had started and coming right in our direction!  The sound grew even louder as the parade people came closer and before I knew it, I was smack bang in the middle of it!

The Omikoshi (portable shrine), which looked like an angry person in this case, was bopping up and down as it was hoisted on the shoulders of strong men who led the parade.  They were followed by dancers who were pumping their fists and shaking their feet deliriously.  Police wearing flak jackets helped to open the way for the parade to march through very busy Center Street.  I took some pictures of the whole thing and KL recorded a little of the drummers banging on huge drums.  But be warned: those drums are loud!