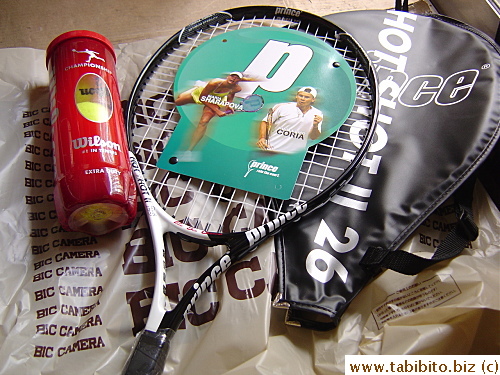 KL and I have been talking about starting an exercise regimen for months and did nothing about it.  He tried jogging once but that made his feet hurt and he thought about joining the gym but there isn't one near our home.  The only feasible sport we could do and actually enjoy is tennis.  So he finally bought a tennis racket last week and hopefully we can start doing some exercise to combat our expanding waistline.


He only bought one racket because we thought we could take turns practice playing it against the designated tennis wall built by the local government.  It is the only free way we can play tennis in our neighborhood, all other courts are rented out for a fee.

We got to the court early on one Saturday and it was already filled up with players playing WELL.  These people were playing as if they were professional players.  Where're the goofy ones to make us look good? There was none.  KL and I were the goofy ones!  KL fared a tad better than I and managed to do a few volleys.  I couldn't get past TWO hits without losing the ball in the court on either side and disrupting other players.

The worst thing isn't our lack of skill which makes us look like a couple of fools who spent 90% of the time chasing after balls which were rolling all over the place.  The unfathomable humility came when we realized we were the oldest, chubbiest and frumpiest dorks in the entire court amongst stick-thin athletic-type skillful (mostly) teenage players!  The only thing bouncing on the court was not the tennis ball but our fatty midriff!

Nintendo's Wii is on sale Dec 2 in Japan.  Apparently one can use the control as a racket to play virtual tennis on the TV screen.  We can look as dorky as we wish in the privacy of our own home and there'll be no Sharapova-san or Federer-san around us.  But is playing virtual tennis considered exercise?  I say it is!