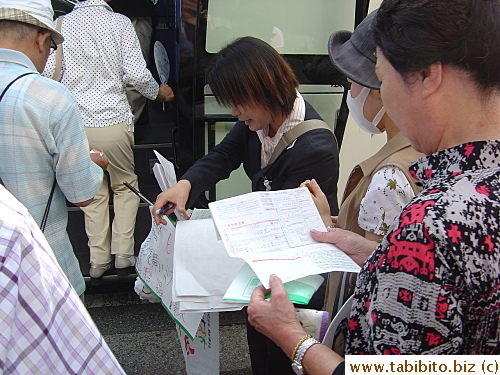 My friend Ishida-san invited me to go on a "Mystery " tour with her.  With this kind of tour, the company doesn't tell you where the destination is, but they do tell you most of the activities participants'll be doing.  She's asked me to join an overseas Mystery Tour before but I thought that's a bit too funky for me.  This one we went on revolved around a flower and fruit theme, two subjects that I enjoy, so I gladly signed up.

As soon as the bus picked us up from Kawaguchi (川口), the tour destination was revealed to be Yamanashi-ken(山梨県), a prefecture on the west side of Tokyo known for peaches, grapes, blueberries and a bunch of other produce.  We drove past rolling rice paddies, corn fields and numerous fruit farms.  A fun (but kinda pointless) little activity was taking a ride on the train at Nobeyama (野辺山) station.  The train earns its name because it runs on a single skinny track and only comprises of two cars.  It was just a short 5-minute ride and we all hopped off at the next station where we boarded back on our bus.

We also made a brief stop at a shrine/temple dedicated for Yamamoto Kensuke (山本勘助), an apparently very important consigliere for his famous-in-Japanese-history boss, Takeda Shingen (武田信玄).  My understanding of the history lesson presented that day amounted to just those two names only, anything else the guide told us went Poof! over my head.  I'm also supposed to be awed by the shrine, the atmosphere and the small woodland behind the shrine, but I only had eyes for the noisy cicada on the trees and the thought of all-you-can-eat fruit later filled my head.

A "secret" listed on the itinerary was finally revealed before we went to the fruit place.  It was a frigging jewelry factory!  Come to think of it, it really isn't very surprising that they include a high-end shop on the tour.  The cost of the tour (5500Yen P/P, about US$46) is so low that I don't know how they're gonna turn a profit without squeezing in a potential commission earner.  But as far as I could see, not one single person bought the necklace they spent so much time and effort selling.

After a long 35 minutes in the shop, we finally headed to the final stop of the day.  The fruit place also grows lots of grapes and each of us had a chance to cut ourselves a bunch to bring home before we went to the "buffet" table.  But I was so busy taking pictures that a staff offered to cut it for me and hurried me off to join the hungry crowd.  Thirty minutes isn't a lot of time for me to admire the bunches of green and purple grapes and surrounding peach trees AND to eat fruits.  The quality of the peaches and musk melons weren't consistent as I got some sour peaches and bland melon on my seconds.  The miniscule Japanese grapes were all sweet though which I ate a great deal of.

One of the enjoyable things for me the entire day was the ability to buy super fresh produce.  Local farmers sell their veggies striaght from the farm at a fraction of the price of those sold in Tokyo at most of the stops we made.  Some of the freshly harvested beans I bought were still warm from the sun and so very cheap.  The Moroccan beans selling at 200Yen (US$1.7) for 5-6 beans at my local supermarket cost only 100Yen for a big bag, all 31 beans at the sunflower farm in Akeno(明野)!  The most attractive part is not so much the price as it is the freshness.  How often do you buy veggies which a short while ago were still growing in the field?  Me never.  But the best buy may be the huge dried shiitake I bought, the farmer told me he sun dried them himself from locally grown shiitake.  Such quality dried mushrooms would've cost me a bucketload more in Tokyo.  Finally I also reveived three lettuces (cut from the field just an hour ago) from the tour company as a souvenir, woohoo!

I will need to spread the photos over several days so you can relive the day with me, hehe.