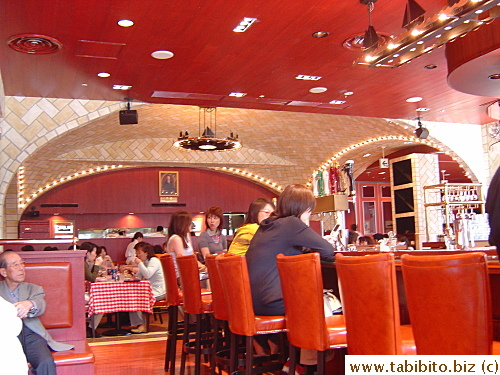 ) underwent a major renovation not too long ago.   One of its new features is the restaurant floor in the building which is modeled after a New York street with open cafes and American style restaurants.  KL and I went to lunch there last week to check out this particular place which I had heard so much about.  It is called Grand Central Oyster Bar & Restaurant.


The place is a carbon copy of the original one at New York's Grand Central Station.   As the name implies, the restaurant specializes in oyster cuisine, served raw or cooked.  There is a counter behind which boxes of fresh oysters are displayed.  Diners can sit right at the counter and sample the different kinds of oysters to their heart's content.  The restaurant has kept their menu as close to the New York's one as possible.   For people who don't like oysters such as me, they also serve other dishes besides oysters.  KL decided to have the lunch set which included a Po Boy sandwich ( deep-fried oyster sandwich), clam chowder and coffee and he also added two fresh oysters to his order.  I chose two appetizers which were lump crabmeat cocktail and fried popcorn shrimp with creole dipping sauce.  The food was good and the service was even better.  To someone who is a big fan of oysters, this restaurant will be a good place for a satisfactory meal.