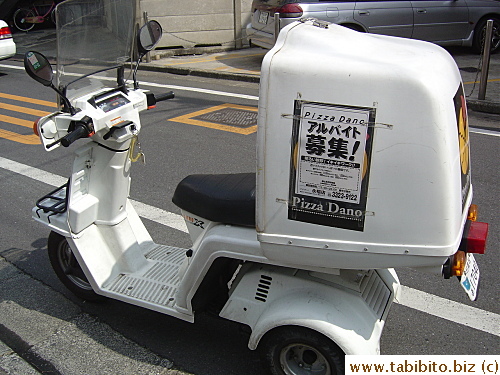 I do feel very safe living in Japan.  Though Tokyo, being a densely populated metropolitan city, has its share of crime; crime rate is still relatively low compared to other industralized countries.  Of all the countries I have visited or lived,  Japan is the only one I don't feel the threat of being mugged walking at night or in the dark.  This does not mean I am naive enough to completely let my guard down, but footsteps behind me don't bring on the paranoia of impending attack anymore.  It's an overall secure feeling I get here.  Unfortunately crime rate has markedly increased in recent years due to economic downturn and climbing unemployment rate, there are also increased incidents of crime committed by foreigners.  Nevertheless petty crime remains low enough to make me not jump at my own shadow.


There are still plenty of honest and law-abiding citizens out there to make Japan a safe country.  Occasionally you will see "honor systems" at work in daily life that do not stand a chance in so many other countries, such as unmanned produce stands.  Vegetable farmers sometimes set up a table to sell their produce on the street without anyone looking after the goods.  There will be a flimsy box nearby in which shoppers drop the money.  In my neighborhood, there is a tiny stand selling newspaper with a tatty metal box next to the papers, people dutifully pay for the paper on their own.  Stores often put their merchandise miles away from the shop unattended not worrying about people pilfering because thieves are rare.

In Sydney, we lived in a big house and drove a decent car.  But I always worried about our house being burgled, our car being stolen, or being mugged walking on quiet streets; life certainly wasn't very relaxing.  If I had a choice,  I would rather live in a small apartment in a country where I don't need to feel afraid.  I'm glad Japan is that country.