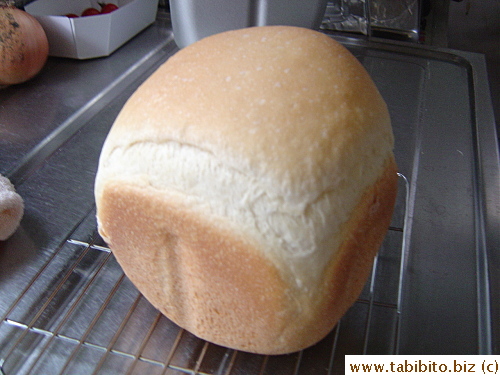 Wow, I LUUUUVVVV this Zojirushi breadmaker!  It is so awesome!  I haven't even had time to explore its dough making function yet cause I've been solely hooked on the loaf function so far.


I find that this 500gm loaf is perfect for us.  There is no point of having a bigger machine that makes a bigger loaf, cause then we won't be able to finish it in two days and I'll have to freeze the rest, thus totally defeating the purpose of having a breadmaker to make freshly baked bread at home.

The best thing about the loaves is their crust.  Oh man, it's so crusty yet not so hard that it'll break your teeth.  It's like the crust is made of several layers of Pringles stacked together and it just crumbles beautifully in your mouth.  I have the impulse to just shave off the crust on all five sides (not the top, the top doesn't get crispy) and eat it every time a fresh loaf comes out, but KL would have my head if I did that.

This bread machine can make three textures in its loaves: chewy, fluffy and soft.  Although the chewy texture is very soft, it is too "spongey" for my taste.  I'm sticking to the fluffy texture which is perfectly soft and fluffy.  (I haven't tried the soft texture mode yet)

If I want chewy bread, I'd make the French Bread (baguette) loaf which is seriously toothsome and has an even thicker but harder crust like real baguette.  The only drawback is you've really got to eat it while it is fresh or the crust becomes chewy.  But you can always refresh the leftover bread in the oven.  Simple.

There is, however, one imperfection about the machine: it doesn't mix add-on ingredients evenly, thus resulting in whatever you add to the dough (at the "add ingredients" timing) such as chopped vegetables, pool on the perimeter of the bread.  BUUUT, I found out a way to remedy it, haha.  I add the ingredients at the very beginning instead of later as instructed and everything gets mixed up real well.  Problem solved.

P.S.  I'm not posting recipes of the loaves here since they're only good when you make them in a Zojirushi, and if you already own one, you'd have those recipes in the instruction booklet already.