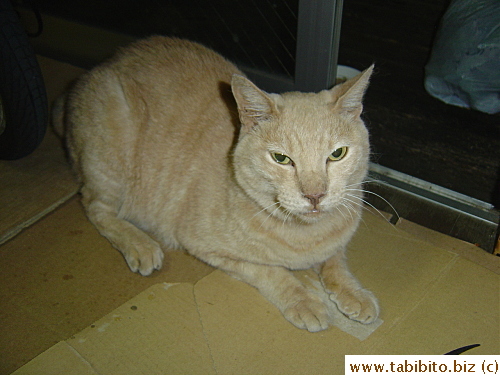 There's been a new stray cat who comes to our balcony to snack.  The one feature that makes this cat so much more attractive than other alley cats is his docility.  He comes right inside the apartment when you open the door, he enjoys being patted, he purrs at your feet, and he doesn't resist when you squish him on the floor or flip him on his back to examine his tummy (Yes, I did that).  For ease of reference, I've named him Ooji (meaning Prince in Japanese).


After "examination", we found out he's been desexed 'cause he matches Daifoo's manhood remains anatomically.  Judging from the way he enjoys human contact, Ooji should have had good experience with people.  Hopefully the time he doesn't spend with us is the time he spends at his own home.