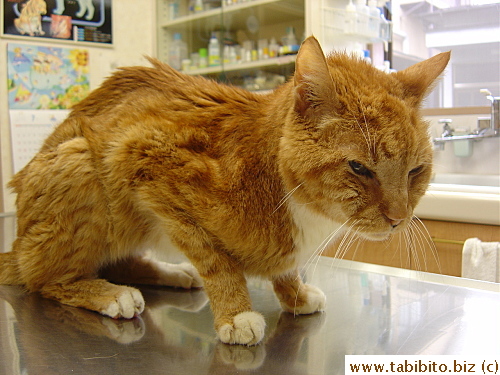 Daifoo passed away on July 4th from kidney failure; he was 17 years and 8 months old.  Due to the excruciating pain and indescribable devastation of losing him, it's not until now could I gather myself together to organize his pictures and write this post.


The multiple IV treatments Daifoo had been given proved to be fruitless afterall, it made him slightly well for just a couple of days and he would lapse into lethargy with no will to eat or drink.  The urinary frequency returned, worsened by incontinence, bloody urine and at one time the presence of pus.  While his kidneys were shutting down, I continued to make trips to the vet to "force" him to give Daifoo nutrients and antibiotics injections hoping at least we could cure his bladder infection.  The doctor said it was no use but gave in to my plea.

Every time he got weighed at the clinic, it was down by a 100 grams until he last registered 2.7kg (6 lb) and his temperature dropped to as low as 35C (95F).  The doctor, in his calming and comforting voice, told me no injections would bring him around.  I asked him how much longer Daifoo had, he said 2 to 3 days.  Of course I immediately bawled my eyes out, the thought of losing him, our beloved friend, was too much to bear.

Daifoo was then sent home with his medications stopped.  I continued to feed him liquid diet through a syringe until the day he refused to even open his mouth.  He became so weak that his body was limp and he would occasionally roll his eyes without lifting his head to look at us, coupled with a few groans.  I don't know how much longer he would have to suffer before he went, but we couldn't bear to see him like that and decided it's time to give him peace.

We took him to the vet to have his very last injection, an anesthetic that put him to sleep.  On July 4th, 4:32pm, Daifoo passed away peacefully and quietly surrounded by the doctor, two crying nurses, KL and me.

The few days before Daifoo died, he spent most of the time lying in the bathtub.  During the night, we had to shut the bathroom door so as to stop him from dragging his body inside it because once he was in, he was too weak to climb back out.  At dawn July 4th, I heard him yell.  I rushed downstairs and he was sitting in front of the bathroom door, turned his head around to look at me and meowed loudly once.  He asked me to open the door and put him into the tub which I did.  That was the last time he talked to me.

His body might be gone, but his anecdotes, the mischief he had gotten into, and all the happy memories he brought us lingered on and on and on.  It was like losing a very close friend when Daifoo died, a friend no other cats can replace.