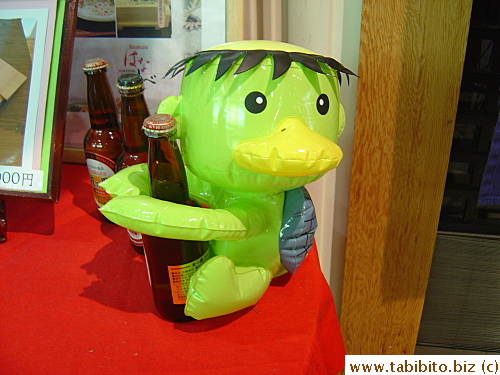 ), which literally translates as "River Boy".  But Kappa are more like River Imp.  Although a few of them are said to give humans a helping hand, most of them play tricks on people.  There are many stories about Kappa and depending on who you talk to in whichever region, there is bound to be a different version of the history and tales about these strange creatures which live in the sea or swamp.


Kappa looks nothing like a boy.  The only thing a Kappa resembles a human being is that it walks on two legs and have two arms.  Its face looks like a frog with a duck's bill for the mouth.  It is bald but a ring of hair circles its scalp.  It also carries a turtle shell on its back and its hands and feet are webbed.  A Kappa is actually quite ugly.

I don't know if calling someone a Kappa means the person is bald, or ugly, or a prankster; but sometimes it does have the positive meaning of saying that person is a good swimmer.  But I think the safest way to commend on someone's swimming skill is to say he/she swims like Kitashima Kousuke-- the beloved Japanese world record breast stroker-- and not Kappa.