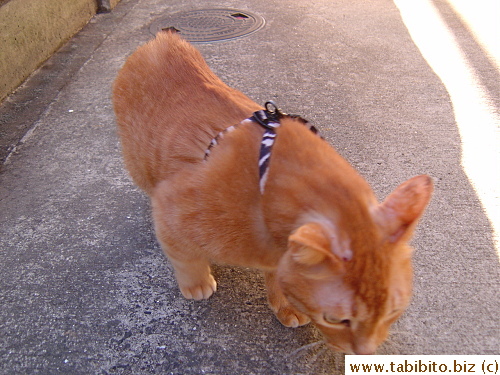 The lady, Ms Y, in the apartment behind ours is the most kind-hearted cat lover I have ever known.  When a stray cat was found dead in the brush near our apartments, she took it to a local shrine and had it cremated and blessed there.  She recently showed me the little cat she found on a road after it was hit by a car.  She took the poor kitten to a vet, paid for its surgery, medicine and hospitalization expense.  Thanks to her, the 2-kg (4.4lb) cat is alive and reasonably well although one side of his leg is still bald and the leg is crooked.  The cat will have a limp for the rest of his life, but he will also spend it in a warm and loving home.


Ms Y already owns a 10-yr-old ginger cat called Remi.  Because our landlord stipulates that only one cat is allowed in the apartment, she is basically risking eviction when she decided to rescue the kitten and keeps it in her home.  She told me not to tell people about the second cat which she has named Towa and I said not only will I not tell others, I will lie about its existence if someone so much as suspects her having two cats in her apartment.  Good people like her deserves my help.

I saw Remi walking alone in the corridor of the apartment building next to ours the other day when Daifoo was having his daily walk.  Daifoo was checking him out very intensely because he has a tendency to drive all cats away from our immediate vicinity.  Our cat is very strict on guarding his territory and no cats are allowed in sight.  I have seen him chase away every cat that has come near our home.  Remi was sniffing the road warily as usual and Daifoo just watched and followed him.  Finally he made the mistake of stopping outside our door and sniffed the pillar.  Daifoo would never allow an intruder hanging around in his place, as a result he struck Remi with one swift blow on the head.  I quickly stopped his attack on our neighbor's cat and Remi was able to escape.  The first cat to strike in a fight always happens in just a split second; if you blink, you'll miss it and it is actually quite amusing to watch, providing no cat is hurt in the scrimmage.