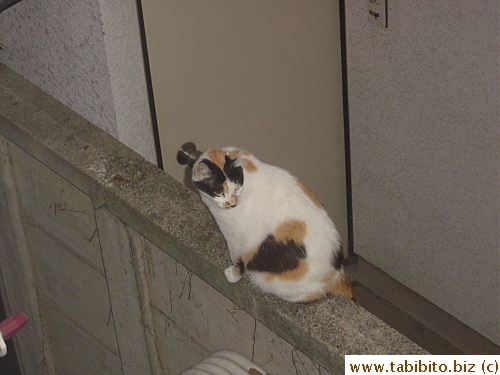 A heavily pregnant cat used to wander around our apartment frequently two months ago.  Then all of a sudden it disappeared.


A week ago, when I went outside to water the plants, she emerged from the car park and came charging and meowing (darned near braying) toward me.  She was thin as a stick and her big belly was gone.  There was no mistake this poor cat was starving.  I went inside the apartment to grab some food for her and when I opened the door with a bowl of Daifoo's canned food, she almost forced her way into the house!  Before the bowl was squarely placed on the ground, the ravenous cat went right to business and wolfed down the lot in seconds.

Mama cat has been back since for more food and she eats like there's no tomorrow every time.  I don't know where her kittens are or if they are still alive, but they can't be doing too well if the mother is always that hungry.

I don't think I was her calculated target on that first day I fed her for any particular reason.  It's not like she waited for me to come out of the apartment because she knew I love cats and I happened to have plenty of cat food in the house.  I simply was the only person she saw at a time of her desperation, a piece of driftwood she seized when she was drowning in the ocean; and it is lucky for her that it was me and not some nuts who torture animals for kicks she ran to.