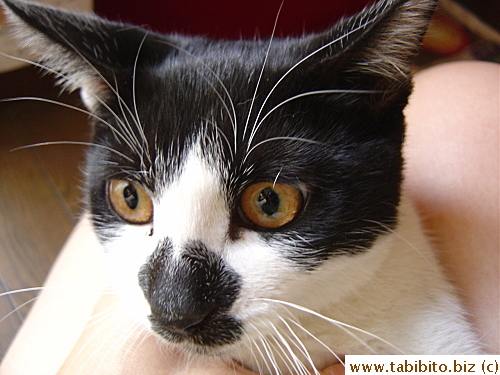 We have seen several litters of kittens born in our neighborhood.  The kittens have either disappeared or in most cases died of some sort of flu-like illness.  Now that the two remaining kittens of Mama Cat's last litter have grown close to humans and easy to be caught,  I've taken them to the vet for vaccination shots.


Mrs Y who has been bringing food for the cats caught me trying to catch the black kitten the day I took her to the vet and offered her small pet carrier to me instead of the flimsy handbag I got.  Later that day she shoved an envelope in my hand and said that'd help with the cost.  I tried the hardest to give her back the envelope and she just backed off and nearly fled.  Well, I thought I might as well accept it with grace rather than to create a scene on the street.  When I went inside the apartment I found a crisp10000 Yen (US$85) bill in the envelope!  Wow, how generous of her!

She says she plans to take the kittens to a vet who fixes cats at a much lower rate as a charity cause in the future.  (I offered to split the cost but she rejected)  If she lives up to her plan, I think there is a good chance the kittens will live a much longer life than the unfortunate ones before them.