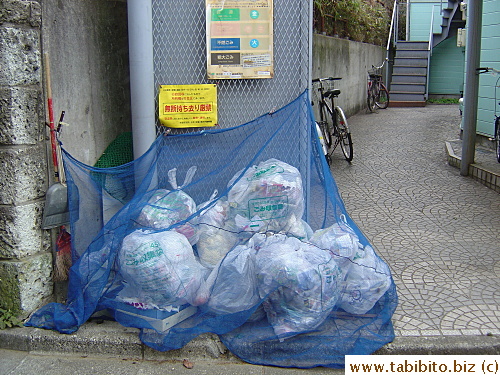 There has been several cash discoveries by garbage workers the past few months.  The most recent one was reported by The Mainichi Daily News on April 13th which says "Police have returned 5 million yen to a 35-year-old man after he hid it in a garbage bag at home and it was thrown out at a trash disposal area".  The story goes that the man's wife didn't realize her husband has hidden the money in a garbage bag and threw it away when she thought she was just tossing out trash.


I'm glad the story has a happy ending in that the money was returned to its rightful owner despite three other lowlifes who also claimed they threw away a trash bag full of money at exactly the same garbage collection point after the story broke on the news.  But my query and concern on the story is WHO'S BEEN OPENING TRASH BAGS TO LOOK AT THEIR CONTENT?   (And: What kind of people stash rolls of cash in garbage bags and then throw them out by mistake?).  If garbage bags go straight to the incinerator without being "examined", how on earth is cash ever being found in them?

If examing trash is part of the job description of garbage workers here, then I have nothng but respect for them.  Not only do they have to pick up smelly trash to hurl it into the equally smelly garbage trucks, and meanwhile breaking their backs doing so if the bags weigh a ton, they have to OPEN the bags to look at the inside?  Can you imagine opening a bag and be attacked by the stench of rotten food and used female products?

It will not be safe to open our garbage bags.  The fetor from Daifoo's poo and pee litter can knock people dead.