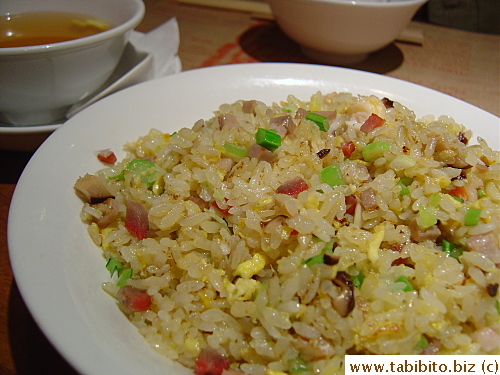 I can't believe it's been over a year since we ate at Sweet Dynasty.  Did time fly or were we just too lazy to make that trip to Aoyama (

)?   Well anyway, make that trip we did on a recent Saturday.  There was only two women in line before us when we arrived at 11:20 am but shortly after we joined them, the line grew quickly.  When our table was ready, I figured there must've been twenty people or so behind us.


KL and I ordered their signature wonton noodles, a fried rice, shrimp rice rolls and a new dessert item on their menu: sticky rice balls with sesame filling in ginger broth which is our favorite Chinese dessert to eat in Hong Kong.

First came the colorful fried rice.  The serving was quite small which was just enough to fill two small bowls.  It had that high-heat induced smokiness which is something I love about Chinese food.  Unfortunately it was also very greasy, so much so that there was a film of oil in the bottom of the serving bowl.  At the end of the meal, I felt waaaay stuffed not by the amount of food I ate, but by the ball of fried rice grease sitting in my stomach.

Next came the shrimp rice rolls which I remember was at least passable last time.  This time the quality has gone down seventeen notches.  The rice sheets were super THICK and CHEWY in stead of being slippery smooth and thin.  Did they get new cooks who have no clue about making rice rolls?  The shrimps were fresh and crunchy (thank goodness) but the scant amount of soy sauce was insufficient which resulted in very bland rice rolls at the end.

The wonton noodles tasted the same as last time which was good.  The so-so meal however couldn't be saved by the much anticipated dessert.  The rice balls were a far cry from the ones we're used to having in Hong Kong.  The dough to filling ratio was bad (too much dough, too little filling)  and the sesame filling bland and flavorless lacking any roasted sesame seeds aroma.  The sesame taste was overpowered by the gummy texture of the flavorless rice balls making this a bad dessert in my book.  I did like the ginger syrup/broth though.

This disappointingly mediocre meal won't see me running back to Sweet Dynasty any time soon.  I'm happy to give the restaurant another year to regroup and hire someone who can make rice rolls and proper rice ball dessert.