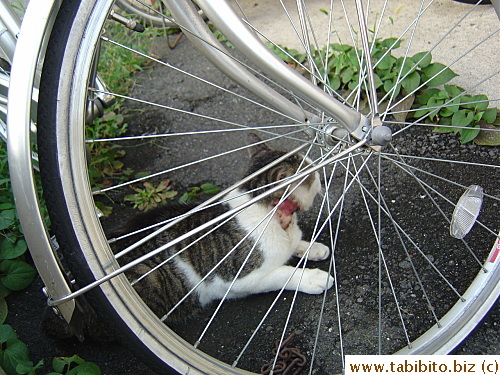 There is this grey tabby tom cat who appeared in our neighborhood several months ago and has since taken root.  He hangs around in the apartment complex adjacent to ours and is extremely wary of humans.  You can't even whip out a camera in front of him without him scurrying off for cover immediately.  He has a great big open wound on its neck which looks raw and red rimmed with a circle of caked crusty black bits.  Nobody could get close to him, so although some of us would like to take him to the vet to have that wound looked at, we couldn't do it.


Sometimes he would wait outside our apartment and I would give him food which he happily devours.  He is so timorous toward humans that if I put the food bowl down too close to him or too slowly, he would attack my hand.  Hissing at me seems to be his only choice of defense mechanism against me whenever I try to approach him.

He has been faring pretty well despite that festering sore which doesn't seem to worry him at all.  It's a wonder why he hasn't died from infection long time ago, I am sure this cat has nine times the "nine lives" cats purported to have.