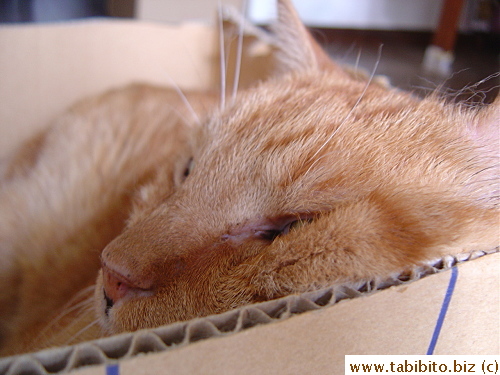 We just passed our eigth year mark in Japan not long ago and I just realized how outdated the "About" page is on this site.  I think I need to rewrite it a bit, add some new information and give more personal thoughts.  The best way to do this for me is to do a fake interview with fake questions but real answers.


Q: When did you guys come to Japan and why?

A: 1999 July when KL my husband got a scholarship to do research at Tokyo University.

Q: Wow, he must be really really smart!  So, is he still doing that?

A: He's the smartest guy I know, and I know a LOT of people.  He worked at the university for just over a year before he got recruited by a head hunter.  To make a long story short, he's been working in the industry ever since.

Q: Many people want to know what he does for a living.

A: Frankly speaking, I'm not sure myself.  He tells me it has to do with computers which doesn't answer your question (or mine) really 'cause most jobs involve the computers one way or another anyway.  Hope he's not a secret CIA spy underneath that salaryman facade, hahaha. {laughs nervously}

Q: {Daifoo walks by and sniffs the fake interviewer's fake pants}  Oh, where in the world did you find a gorgeous cat like that?!

A: Thank you!  Daifoo (大富) which means "large wealth" in Cantonese, is our Aussie cat who came to live with us from Sydney in 2001 when he was already 9 years old.   He has lots of medical problems, but the vet here takes good care of him.

Q: Daifoo's mentioned a lot on this site, isn't he?

A: Sure!  He's an important part of our household, he should get equal coverage as us.  And since Tabibito is first and foremost a journal of our lives, I want to put all his stories, all his pictures and all his anecdotes here so when one day he leaves us, we'll have a good record of him for us to look back on {incredible sadness descends}.  Would you pass me that tissue please?

Q: Let's talk about Tabibito.  Whose idea was it and I see your blog isn't the generic type, what's the technical part behind all that?

A: Well, in 2004 after constantly writing group e-mails to friends and family about our lives in Tokyo, we decided to get a blog going so that they could just look at it and not have to ask us where we'd been or what new things we'd seen or eaten.  Besides, I'd been so impressed with the people, culture and everything I experienced in Tokyo that I wanted to write it all down.  So KL wrote a program from scratch and this blog was born.  Our computers at home take turns "hosting" this site so no outside source is needed to get Tabibito going, thus saving us major running cost back then.  I guess you can call us cheap?  I know you can get your own free generic blog these days, but there's no need for us to switch.   As for any questions about the technical stuff behind this site, I'm a complete and utter illiterate when it comes to computers (or anything high-tech for that matter), so you'll have to ask KL yourself.  All I'm responsible for is taking pictures and writing the posts, nothing else.

Q: The number of posts on Tabibito has steadily grown over the years, don't you think this site needs a "Category" to file those articles accordingly so readers can access the articles more easily?

A: Funny you should mention that.  I've been asking KL to work on that almost 18 months ago, but he simply is swamped with work all the time.  He sorta started it but had to put it aside.  Category would be a nice addition to the site, wouldn't it?

Q: When do you plan to return to Sydney?

A: We love living in Japan.  KL likes the sense of security and the friendliness of Japanese people.  Besides, as long as he still has a job, it's easier to just stay put.  As for when we'll return for good, well, it's anybody's guess.  I certainly have a hard time imagining us still living here when we are two old fogies.  Only time will tell, my friend.

Daifoo passed away on July 4th 2009 from kidney failure, he was 17 years and 8 months old.