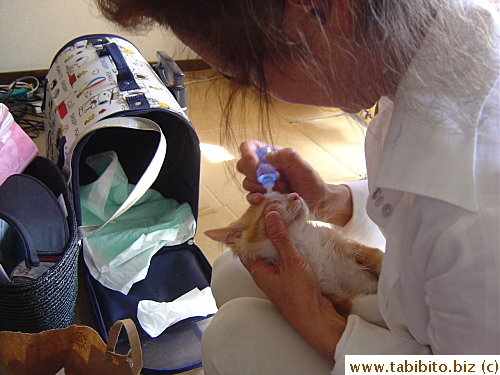 On a recent Saturday afternoon, Takeda-san with our chosen kitten, arrived at our train station where KL had been waiting to take them to our apartment.  It was a super hot day and the kitten, being lugged around in a carry case under the hot sun for 20 minutes (time that takes to walk to our apt), was really traumatized (considering he's never seen the outside world or even left his room).  Before he was released from the case, KL and Takeda-san did all the paperwork including signing an agreement to take good care of the kitten.  At the end she very politely asked for a donation for future stray cats which I think is very reasonable after all the care she puts into keeping them.


For our kitten, he's had all his vaccination, flea and worm treatment, blood test (for FIV and Feline Leukemia) and an additional doctor's visit the day before he came to check his eye for which he was given medication to take home.  Takeda-san even brought a generous amount of the food he's been fed, a toy and a handful of cat litter from his litterbox to put into ours so that the kitten could familiarize himself with the new litter box.  That's just super thoughtful of her to do all this work!

Okay, now that the kitten has arrived, the next task is to give him a name.  And he shall be called EFOO (二富) because he's the successor of DAIFOO (大富)!!  Being so traumatized from the long travel time and his natural timid disposition, all he could do the first 24 hours was cower in his bed and hiss.  He hissed at us EVERY SINGLE TIME we went near him but he would never strike, scratch or bite; he hardly ate, didn't drink, or go to the toilet the first day and he felt very hot, like he was burning up despite the air-conditioning.  We worried if he was sick but he started taking a few bites of the soft food brought by Takeda-san .

His appetite remained poor and I was about to take him to the vet.  On Sunday night, I gave him a treat made for kittens and he gobbled the lot!  Early Monday morning, he was able to eat on his own but not the one he was supposed to have been on.  I gave him a can of Science Diet kitten food and he loved that.  By Monday night, he was eating and eliminating normally, whew!

Takeda-san repeated over and over (four times to be exact) that if it didn't work out with Efoo, we could return him, she said she would even take him back if one day we decide to leave Japan and can't take Efoo to Australia with us.  To be honest, it did cross our minds to return Efoo after finding how extremely timid he was.  It's just not the personality we were looking for; but then he started to warm up to us and the thought of him back in a crowded room and the possibilty of being put down if no one wants him worries us, we just couldn't abandone him.

We realize there will never be another cat like gutsy Daifoo.  We'll have to learn to fall in love with one who is timid, nervy and downright craven.  Efoo is not a kitten, he's a chicken!